December 2017 marks 50 years in operation for the SPX Transformer Solutions’ Goldsboro facility, and we are excited to celebrate our growth and progress throughout this milestone year. While technology, safety practices and policies have all evolved and contributed to our success, we would not be manufacturing power transformers in Goldsboro today without the support from our loyal employees and customers.

Goldsboro operations began as Hevi-Duty Electric, a division of Sola Basic Industries, in a warehouse on James Street in Goldsboro, NC, in August 1966 as a staging/light assembly location while the current facility was being built. In December 1967, Hevi-Duty completed the new 120,000 square foot facility located at 2701 US Highway 117 South. This plant was designed and built for manufacturing small power transformers rated through 10,000 KVA – both dry-type and liquid-filled. By the end of 1967, 157 people were employed at the new plant.

Fast forward to today, the facility encompasses 171,500 square feet of manufacturing and office space and employs over 350 people. After a number of acquisitions, completion of major plant upgrades in 1979 and 1993 along with phasing out dry-type power transformers in 1990, its production capabilities now include units up to 230kV, 112 MVA top rated for autotransformers.

A special thank you to all our customers, employees and channel partners for “keeping the lights on” with your orders, feedback, hard work and overall support. This milestone belongs to all of us, and we will celebrate it together with pride and an eye toward the next 50 years. 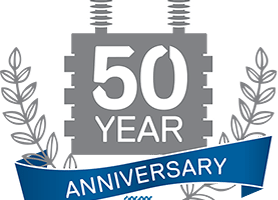